It’s Febreze for shirts! All the odor-fighting power you’ve come to know and love in Febreze products like air fresheners and candles can now eliminate odors in your shirts and in all of your washable clothes. It’s called Febreze In-Wash Odor Eliminator, and it’s a laundry additive that you add to your load of wash in the washing machine at the same time that you add your regular detergent. Your regular detergent washes away dirt. Febreze In-Wash washes aways odors. As award-winning YouTuber Jessi Sanfilippo points out in a facebook post (her Facebook page is called “Shuggilippo”), shirts (especially the armpit areas) are notorious for harboring odors that can range from less than pleasant to downright stinky. Even after they have just been washed. This is because odor-causing particles can get trapped deep in fabrics, and detergents alone simply don’t have the ability to attack and wash out deeply set odors. Detergents cover up mild odors nicely sometimes, but Febreze In-Wash Odor Eliminator actually removes the odor-causing particles. So odors are eliminated, washed away. And it only takes one washing! So don’t throw away your favorite broken-in t-shirt just because it holds some lingering odors. Add Febreze’s laundry product the next time you wash that shirt. After washing, take a whiff and smell the difference. The stink will be gone. And you’ll still smell your regular detergent too, because Febreze In-Wash does not interfere with your regular detergent and is compatible with any and all laundry detergents. Extend the life of shirts! Have better smelling clothes! Odors in clothes have met their match. Febreze In-Wash Odor Eliminator is Febreze for shirts and invites you to Bring The Stink!

Thanks for the goodies, Febreze In Wash Odor Eliminator! Now I can sniff my armpits and my shirt doesn’t smell like Italian salami. #BringTheStink 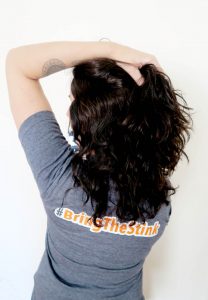