Fish odor, when present in clothes, is unpleasant to say the least. Lots of people like to fish, lots of people like to cook fish, and even more people like to eat fish, but most people do not want the smell of fish lingering on their clothes. Febreze In-Wash Odor Eliminator removes the smell of fish (and other odors as well) from clothing and other washable items like kitchen towels and aprons. Used in conjunction with your regular detergent, Febreze’s odor eliminating additive removes odors in a single washing. When Detroit News recently published an article showcasing some “Good Stuff,” Febreze In-Wash Odor Eliminator was featured, as were cedar planks used for grilling fish. With grilling season well under way, keep towels, aprons, and clothes fish-odor-free with Febreze. And for folks who like to spend their spare time either out on a fishing boat or sitting at the shore with a pole in the water, Febreze’s odor eliminator is the way to keep on fishing without suffering the undesirable side effect of clothes smelling like fish the next time they are worn. So, enjoy the fish, enjoy the grilling, enjoy the cooking, and enjoy the fishing! And don’t worry about fish odors lingering in your clothes. Febreze In-Wash Odor Eliminator invites you to bring the fish and to bring the stink!

Febreze, the popular product designed to freshen up unpleasant spots and items, has come out with an in-wash additive they say has “three times more freshening power.” The Febreze Laundry Odor Eliminator is designed to work with laundry detergent in the wash and tackle any lingering smells from tough odors such as campfire smoke, mildew or burned dinners. Sold at major retailers including Wal-Mart, Kmart and Meijer. 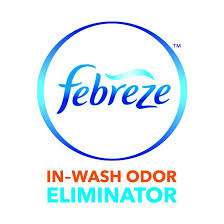