Wash running clothes odors away with Febreze In-Wash Odor Eliminator. As the writer of the article below explains, Febreze’s odor removing additive removes all traces of stink from running clothes in just one wash.

I try and run outside whenever possible. Yes, it’s true when I started my running “career” a little over 5 years ago I did some running outside but most of my quality workouts, where I needed to run a specific pace was done inside…on a treadmill. My reasoning was that how could I EVER keep a consistent pace on my own, the treadmill made it easier to set it and forget it as they say. BUT several years and many miles later, I have changed my thinking and now relish (for the most part) my outdoor runs. In addition to the freedom I feel when running outdoors, however, especially this time of year is heat and humidity which inevitably finds a way to migrate it’s way to my running clothes making them very, very stinky.

So, what’s a runner (or really anyone that spends a lot of time outside) to do. I don’t have money to spend on countless changes of clothes, so I need a way get the stink out so that I don’t smell the last run on my next run.

I have tried all types of products and tricks – some have worked (adding a cup of vinegar to the wash works wonders) and some have failed (many of those expensive “so called” sports detergents).

So when I was given a chance to try the new Febreze In-Wash Odor Eliminator that claimed that my laundry would have a fresh clean scent -no matter what odorous encounters it has had. They told me to #BringTheStink and the product would do the rest.

So this past weekend with week’s worth of sweaty running clothes AND Mark’s stinky soccer clothes ready to be washed, I put Febreze In-Wash Odor Eliminator to the test.

After doing a smell test on a couple of clothes for authenticity, I added my detergent pod and the Febreze In-Wash Odor Eliminator to the machine and started the load of wash.

Once the cycle was done – I removed each piece of previously dirty clothing and gave it a big sniff test. And you know what – all I smelled was a fresh and clean scent without a trace of the sweat and stink that had been permeating many of the clothes only 40 minutes before. 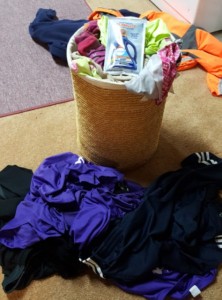