Washing athletic clothes odors away is easy with Febreze In-Wash Odor Eliminator. Just add the odor eliminating laundry additive to the load of laundry when you add your regular detergent, and Febreze takes it from there. Lots of athletic clothes are manufactured from high tech synthetics fabrics, and while these clothes do a great job of expelling moisture, they also do a great job (if we can call it that) of absorbing odors. So, in order to remove odors from these athletic clothes, strong odor fighting power than that of detergent alone can be necessary. Enter Febreze In-Wash Odor Eliminator. It is specially formulated to lift odor causing particles away from fabrics, and so odors are removed from fabrics as they are washed. This is no cover up! Detergents mask deeply absorbed odors with perfumes, but the odor-causing particles still exist within the fibers, and so odors return. That’s not clean. Deep odors require deep cleaning. Athletic clothes odors require a more powerful alternative. As the article linked below mentions, Febreze is safe to use on synthetics (and virtually all washable fabrics). It’s also perfectly compatible with High Efficiency (HE) washers. Better smelling athletic clothes are just a load of laundry away. Don’t just wash away all of the dirt from your athletic gear. Wash away all of the odors as well with Febreze In-Wash Odor Eliminator!

High tech, synthetics are amazing at wicking away moisture thus keeping you cooler. These same polymers can also hold odors. You can certainly add some neutralizing baking soda to the wash. I usually do my sportswear pieces by hand so add a little Febreze Odor Eliminator to the sink. It works very well as an in-wash odor eliminator and has been safe to use on these synthetics. 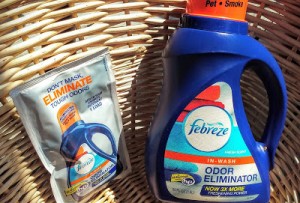